The Euro moved down strongly after the news release from the ECB and the Euro took out the low from the 28th of June.

On the 4-hour chart we see that the Euro formed a bear flag (blue circle) after yesterday's down swing, which got triggered with the news release from the ECB. The Euro moved down straight and currently market found support at the monthly S1 below the recent daily low (pink line-28 of June).

On the hourly chart we see that EUR/USD formed a triangle (bear flag on 4-hour). The up-trending green line of the triangle got touched from the 8 a.m. hourly candle (weaken). The following hourly candle at 9 a.m. closed below the green line and the 10 a.m. hourly candle took out the triangle low (green line-grey circle). The Euro moved back into the price zone of the consolidation, which usually acts as resistance (12 a.m. -blue circle). Market moved down strongly from there with the news release form the ECB.


The brown circle on the 5 min chart (below) shows the breach of the up-trending line of the triangle consolidation pattern, which then started to act as resistance. Market initially moved down to the daily S2, penetrated it and retested this level from the downside (green circle) before resuming the down trend to the 61.80 % fib extension, the daily S1 and monthly S1 at about 1.2387 (blue circle). This swing down penetrated the recent daily low at 1.2707 (28 June) and market retested this level again from the downside (also 10 SMA-red circle) before market moved down to the 61.80 % fib extension at 1.2363 (pink circle). Market currently consolidates around the monthly S1. 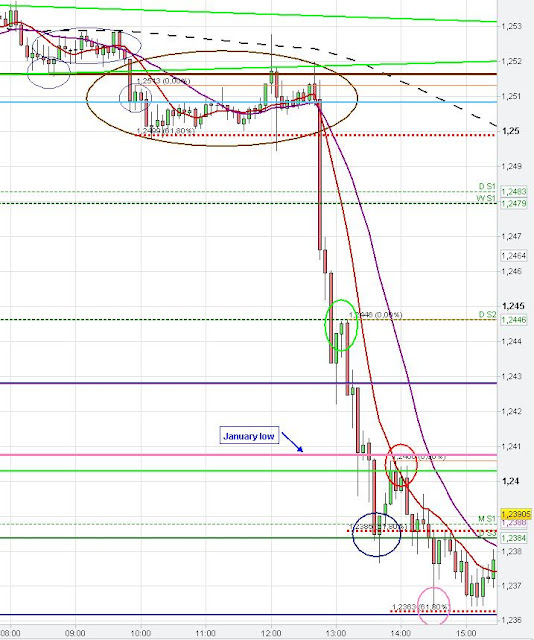